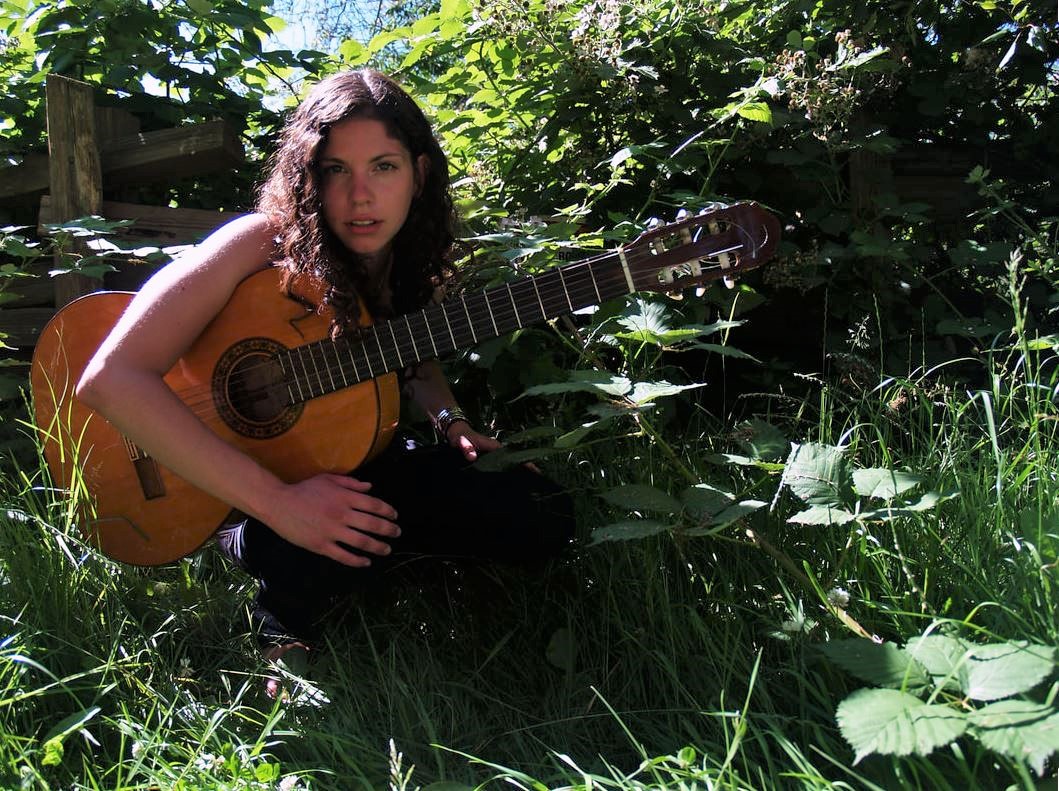 Our latest musician spotlight is on Jess Hart, a rising talent in the British Columbia music scene. She’ll be performing on October 20 as part of our Friday coffeehouse live music night 8 – 10 pm (along with Feona Lim and Kieran Mercer) at Trees Organic Coffee & Roasting House on Granville Street.

Originally from Montreal, Jess Hart is a singer-songwriter living on the West Coast since 2009, but she started composing and performing over 15 years ago. She describes her music as grunge-folk, alternative but considers herself as trans-genre having released a folk EP, an alternative-rock debut album, and now working on an electronic set and possibly a Motown-style album.

Jess believes she is more a songwriter than instrumentalist, even though she plays many instruments at various levels – guitar, ukulele, piano, drums, base and harmonica. She is currently working on music as a full-time solo artist and has already composed around 100 songs, with a backlog of song ideas waiting to come into existence.

Following her 2005 self-titled EP release, produced by Studios Piccolo Productions, Jess started to self-produce and record her new material. Her debut album – Incorporated – was released in 2009 and charted #11 on CIUT 89.5 FM (Toronto). Then, her single – Lifestyle Ad – charted on the Canada iTunes top 100 Singer-Songwriter Songs in 2012. From there, Jess was named artist of the month on CKXS 99.1FM (Ontario) and awarded 3rd place for original music on Eastlink’s Coast Cable “Out Loud” music competition. She continues to love the art of recording and experimenting with sound and remixing with the latest technology.

Read on for more about Jess Hart and catch her performance on October 20 at Trees Organic Coffee (Granville Street) where she’ll perform an acoustic set featuring some of her folk-rock material.

In Conversation with Jess Hart

TO. Do you have formal musical training or self-taught?

Jess: I’m a self-taught musician and have always had an ear for music. I think that a lack of formal training has had an interesting impact on my songwriting experience, as there is still mysterious allure to the workings of music that results in a different approach to the process. Music is very intuitive for me, so I’ve always found it difficult to connect to music theory and formal training, however in recent years I’ve begun to really appreciate and find creativity through the understanding of these elements of music.

TO. Who are your main musical influences?

Jess: My main musical influences are Radiohead and Tori Amos along with other 90’s alternative groups. I’m also greatly inspired by Led Zeppelin, The Beatles and Bob Dylan. Recently, I’ve gotten into some of the Bossa Nova classics like Tom Jobim, Elis Regina and João Gilberto.

TO. What inspires the stories or themes behind your music?

Jess: I like to view music as a vehicle for change. As such, I’m likely to stray from the typical female singer-songwriter love ballad and deal more with what I feel are pressing contemporary issues, such as media concentration, isolation, “post” colonialism, corporate ownership, consumer culture and their implications on society.

TO. Describe your song writing process?

Jess: Generally, I begin with the music for a song idea and gradually add melody. I try to think about the message the music is conveying and then write lyrics that relate. Afterwards I begin to think about production and what other musical elements or instrumentation would fit.

TO. What do you enjoy most about self-producing and recording your music?

Jess: I really appreciate the art of the studio album. One of my favorite producers is Nigel Godrich, who produced all of the Radiohead albums and has also worked with Beck and Paul McCartney. I find it a creative challenge to see how production can affect a song and what a big impact or difference it can make. Self-producing allows me to experiment with different ideas and genres to try to find the best fit for the song.

TO. How has technology helped to shape your music?

Jess: Technology has certainly had a big impact on my music and song writing process. I started out right during the popularization of digital recording and had access to great programs and sample banks that were very inspiring. Recording a demo of a new song can help to determine arrangement, while incorporating samples and virtual instruments can really open your mind to new possibilities and directions for the work. In terms of the new live set, technology adds so much depth to the performance and it also helps to challenge me as a musician.

TO. What are you most excited about in the near future and what are your musical goals for the next 3-5 years?

Jess: I’m very excited to finish producing my new electronic-alternative album with 11-13 tracks. I’m only a couple of tracks short now, so it’s really coming along and foresee releasing in early 2018. A new production means a new tour, which is always exciting. In 2013 I spent several months touring throughout Germany and playing for Berlin Music Week. I would love to return for a more extensive European tour featuring the new electronic material. Musical goals would include agency representation for future tours and to secure some significant licensing deals with the new material.

I’m also thrilled about my new demo videos – Palace Series – demonstrating a creative way to showcase new electronic material with a virtual live set. The videos were shot using green screen here in Vancouver in collaboration with Blue Zula Productions and the music was produced using a Mixvibes app. Check it out here.