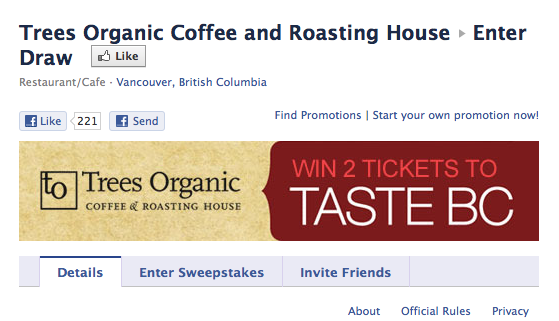 Take Our Poll and Win Tickets to Taste BC

Trees Organic Coffee and Roasting House is taking part in the Taste BC Fundraiser for BC Children’s Hospital. Take a quick poll on Facebook and you could win tickets to the big event! We’re giving away two sets of two tickets worth $100 each. (One entry per person).

Take our Facebook poll and enter to win tickets!

What is Taste BC?

At Taste BC, you can experience BC wine, beer and spirits and delicious food from our best local restaurants. You’ll be entertained by live music. There are great door prizes and a silent auction that features great BC products and destination packages. It’s going to be a great night – and you could be there.

What is Does Taste BC Support?

Taste BC is a great local event to benefit one of British Columbia’s most vital medical institutions, which treats about 700 sick and injured children every day. Taste BC has raised $186,336 for BC Children’s Hospital’s Oak Tree Clinic so far. On its busiest day, BC Children’s Hospital treats almost 1,100 individual children.

This is a great cause and as a local Vancouver company, we’re proud to take part. We’re looking forward to this special evening featuring some of the province’s most well known food and beverage companies, raising funds for an important facility.

Get more information about the event at the official Taste BC website. You can also purchase tickets for Taste BC from event sponsors Liberty Wine Merchants at their locations.

Buy tickets for Taste BC at Liberty Wine Merchants Locations