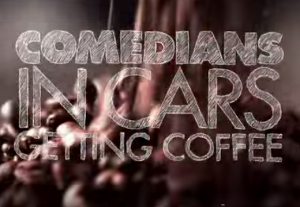 Comedians in Cars Getting Coffee has such a simple, yet brilliant premise: two funny people drive around in head-turning automobiles in search of coffee and conversation. The car product placements pay for the show and the zing in their coffee helps turn those casual conversations into hilarious improvised bits of fun.

We weren’t the first to tune into epic comedian Jerry Seinfeld’s webisodes, but we were definitely not the last. Something happens every time that reminds us of the almost magical effect of coffee to turn an everyday dialogue into memorable performance art.

We see it happen every day in our cafes, when people from all walks of life come in to enjoy a cup of their favorite medium or dark roast, along with some caffeine-charged, mellow human drama.

If you haven’t yet seen the show (or even if you have), here is our guide to our favorite webisodes – though if you disagree, you’re welcome to put forward your own suggestions over a little coffeehouse conversation.

Ricky Gervais. “Mad Man in a Death Machine” from Season 1. Admittedly, some of the best bits happen before they even get their coffee. Ricky Gervais in fear for his life thanks to Jerry’s decision to pick him up in a 1967 Austin Healey 3000 – a British sports car Gervais calls “a death trap”: “There’s no way there’s an air bag in there, is there?” he says as he taps on the dash. It’s a jittery ride, but the coffee is good. Gervais manages to calm down enough to exchange some good banter with his host, just before they head out onto the road again and Jerry utters a killer line…

Chris Rock. “Kids Need Bullying” from Season 2. Another great webisode with one of the best names in the comedy business. This is one of those great conversations where you really get insight into how show business works. It’s clear these two go way back and make a natural comedy duo.

Chris talks about the everyday weirdness of comedy: “The ability to talk to a lot of people is freakish. It’s more freakish than being able to run fast or dunk a basketball… You think Superman could get the attention of 1,000 people?”

Louis C.K. “Comedy, Sex and the Blue Numbers” from Season 3. There’s something immediately funny about Jerry and Louis driving around the streets of New York City in a Fiat that’s no bigger or faster than a golf cart. We learn that Louis opened for Jerry at a Boston club over 20 years ago. Two of the biggest names in comedy today wander over to Louis’ yacht (Louis: “I can’t afford this … You shouldn’t buy a yacht unless you can buy, like, 10 yachts), where the big guy makes Jerry a cappuccino (sadly, not from scratch – he likes machines too much). We also get a special treat of a cartoon reenactment of Louis and his daughters’ funny escape from the East River.

Sarah Jessica Parker. “A Little Hyper-Aware” from Season 4. The star of the eternal ‘Sex and the City’ TV show (has it really been 10 years? Well, ‘Seinfeld’ ended in 1998 – wow, I’m old) gets driven around by Jerry in a classic station wagon with doors made from fake wooden paneling. They reminisce about growing up in a pre-Internet age, the trials of parenting and more.

They finally wind up in a diner and have a beautiful exchange:

Jerry. A cup of coffee, please.

Sarah. You could drink coffee all day?

Sarah. It would give me horrible anxiety.

Coffee: it’s the key ingredient in all of our great conversations, whether you’re Jerry Seinfeld or the rest of us.