Thursday evenings come alive with aspiring performers and supportive spectators enjoying the weekly Trees Organic Vancouver Open Mic night at our Granville Street coffeehouse! Marq DeSouza has been successfully hosting the event for several years. We recently caught up with him to hear the latest about the Open Mic nights and his music career. 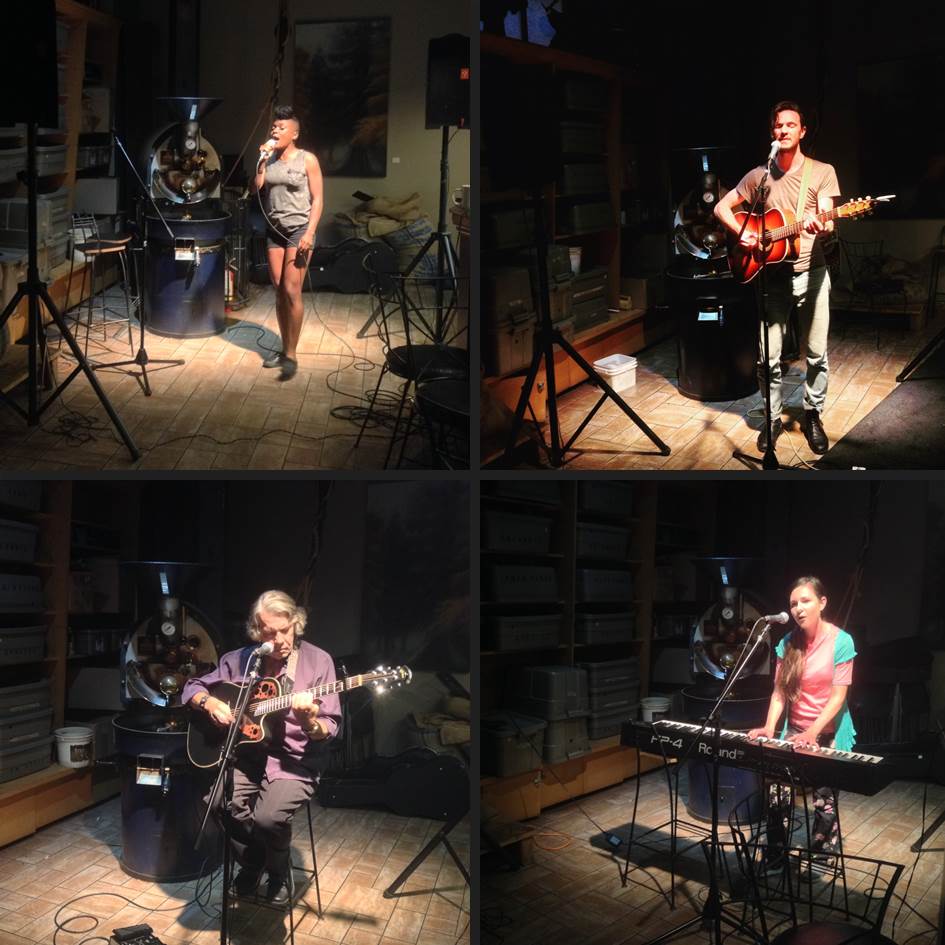 As one of the more popular venues for Open Mic in Vancouver, the Trees Organic event attracts everyone from musicians, singers, poets, comedians to magicians! According to DeSouza, “Each time is different and entertaining, but it’s always a great showcase of local and aspiring talent. Trees Organic and I are happy to provide a stage for the performing arts community in a fun, laid-back setting”.

DeSouza delights in hosting the Open Mic Nights and he continues to be impressed by the sheer level of talent. “It’s nice to see someone who is shy and reserved take the stage, and then bloom into a performer. We have many regulars whose arc I can trace, from tentative beginner to seasoned entertainer”, he says. “And, I’m astounded by how full the house has been! There are so many performers and a supportive, listening audience with many regulars.”

For the 8-10 pm Open Mic time frame, the turnout is amazing! On average, there are about 10-15 performers on a first-come-first-served bases at the 7:30 pm sign up, with DeSouza doing his best to accommodate everyone. Most of the performers are local musicians; however, there are many out-of-towners that drop by when they’re in Vancouver. “We also get touring musicians who are looking for something to do on their nights off. They usually end up selling lots of CD’s and making great contacts”, says DeSouza.

TO. How is Trees Organic’s Open Mic night different from others in Vancouver?

The main draw is that Trees Organic is an all-ages coffeehouse. There are many Open Mics set in bars, which puts them out of reach for underage, developing players. Plus, the café setting is laid back, friendly and perfect for beginning musicians as well as veteran players who are looking for a cleaner vibe. Sometimes I’ll be at the soundboard looking at the whole room singing and clapping along. Those nights are always memorable. We also start and end the night earlier than most other open mics. On a week night, this makes it easy for folks that don’t want a late night waiting to perform.

TO. What is your advice for performers starting out?

An open mic is the perfect place to gain experience in a casual, but supportive environment. We have many first timers who are extremely nervous. I tell them that everyone in the room, including me, is rooting for them. Almost without question, they play great and once that initial hurdle is out of the way they relax and have fun. I’ve seen a lot of friendships and musical partnerships started on Trees Organic’s music nights. There are many contacts to be made each week.

DeSouza is a veteran rock n’ roll artist with four albums and a long list of accolades under his belt. He is a singer-songwriter and multi-talented instrumentalist, playing drums, bass, keyboard, harmonica but mostly the guitar. He has shared bills with Joel Plaskett, Matthew Good, Sarah Harmer and Nickelback. And, he has been dubbed Canada’s Bob Dylan by Canadian rock icon Todd Kerns, referred to as a young Van Morrison by Sir Bob Geldorf, and also thought of as a young Mick Jagger or lotus land Springsteen. Learn more about Marq DeSouza’s music, career and coverage.

TO. Which artists have influenced you the most in developing your music?

When I was a kid, it was all about bands. The brotherhood of The Ramones, Rolling Stones, Public Enemy and The Replacements were high on the list. I have dedicated myself to following countless groups throughout my life.

TO. You have received high praise for your clever and deep lyrics. What inspires you?

Inspiration is such a strange thing. I’ve had some great songs that I’ve been working on for years that I just can’t seem to finish, while other songs come to me fully formed. You just have to be ready for it, as well as be willing to do the follow through.

TO. What are your latest musical projects?

For the most part now, I perform solo-acoustic. I can travel much lighter that way, and with more freedom. A friend and I just finished a pseudo-retro studio project of material from our younger years that had never been recorded. That’ll come out in the next few months in some form. I’ve been doing a blueprint for a new record. Once I lock into it, it’ll be pretty special!