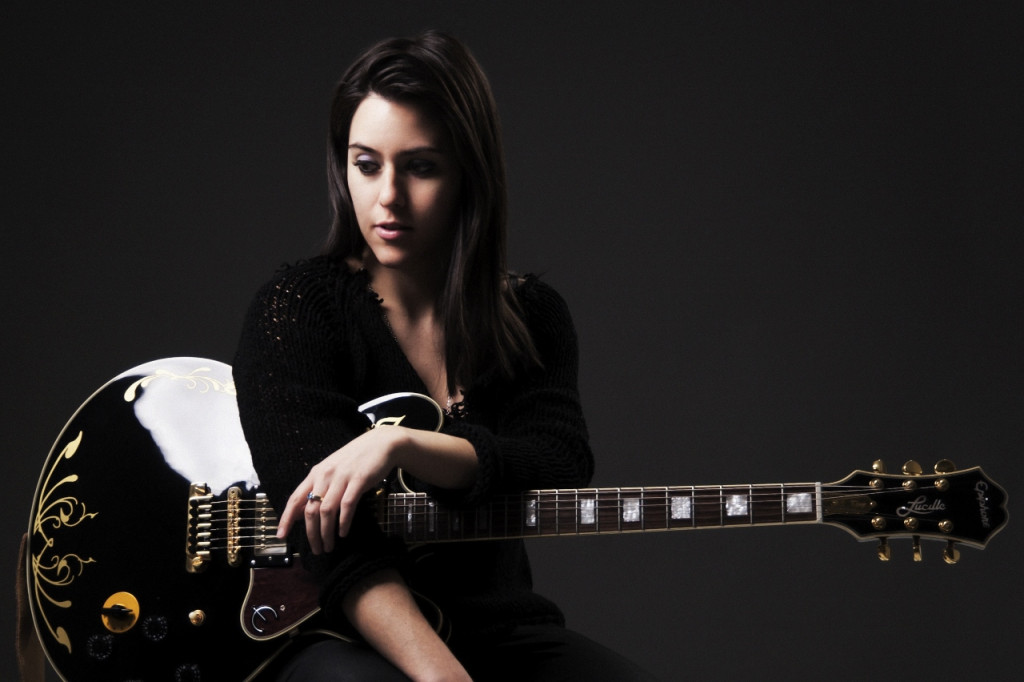 This month’s musician spotlight for our Friday night live music series is Erzsi Institorisz, one of the rising young talents in the Vancouver music scene. She’ll be performing on the live music evening of March 25th at Trees Organic Coffee & Roasting House on Granville Street.

Music has always been part of Erzsi’s life. Her mother, a music teacher, inspired her to start playing instruments at the age of 9, and by 13, Erzsi was writing music. Now in her late 20s, Erzsi has been developing/reworking over 100 works of songs. Erzsi tells us that her songs are mostly inspired by emotions and conveys pieces of life’s lessons. Although guitar is her preferred instrument, she also mixes synth electronic instruments in her work. Today, her music incorporates a range of styles, with folk at heart, but it is predominately alternative rock/new wave, with an uplifting blend of dance, rock and electro pop.

After performing with Audiologue, as a singer and rhythm guitarist, Erzsi went on to collaborate with the band O-Scope. Together, they won first place at AMP Records’ BandFight in 2015. With the prize that included professional support for song writing, recording, mastering, photography, artwork, promotions and publicity, Erzsi & O-Scope (now merged as Among Robots) has been busy working on new material for release this spring/summer, along with a string of shows. The song Tonight (below) was the BandFight win track chosen to be recorded with Winston Hauschild, a renown Vancouver based record producer, songwriter and artist.

Along with launching her musical career, Erzsi is also passionate about the environment and founded GreenSeeds Music Society. It’s a society of musicians, artists and teachers collaborating to produce environmentally-themed children’s songs and stories. In this coffeehouse profile, get to know Erzsi and her musical progress ahead of her performance on March 25th, when she’ll do a set with David Gutierrez from Among Robots.

In Conversation with Erzsi Institorisz

TO. Since winning BandFight in 2015 with O-Scope, how has your musical career changed?

Erzsi. Since winning BandFight, the performing experience has become more vibrant. The BandFight win opened the door to some awesome networking opportunities that we wouldn’t have had otherwise. We got a glimpse of what it’d be like to work with top caliber talent and professionalism in the industry.

TO. What is the background behind the winning song – Tonight?

Erzsi. Tonight is a song about breaking down emotional walls, having some fun, and learning to be mindful throughout every experience. It’s about learning to create and focus on the win-win scenarios.

TO. Who are your main musical influences?

Erzsi.  Apart from my mother introducing me to the arts, Fred Penner got me hooked on guitar as a child. Later on, I was influenced by artists such as Kurt Cobain, Jimmy Hendrix and John Frusciante. Most recently, my main musical influences have been artists such as Radiohead, Metric, The Black Keys, Mother Mother and multiple EDM (Electronic Dance Music) artists. I also appreciate strong vocalists such as Adele.

TO. Tell us more about the songs that you’re working on for your upcoming releases?

Erzsi.  My next release will be a song called Misdemeanor. It’s a song with a chorus that goes “We all get by with what we know”. It reflects on what we know about how life changes drastically from year to year. We’re all on a path of being guided by the people, energies and things that surround us. It’s about getting by mostly on intuition as we can get confused by all of the bombardment of information in today’s social environment. The video for Misdemeanor is almost done and has footage from some of my adventures in BC’s backyard.

TO. What are you most excited about in the near future and where would you like to be in your musically in 3-5 years?

Erzsi. It has taken a while to perfect my craft, and I still feel new to it sometimes but now at least I feel like I can finally start publishing a lot of the material that I’ve been sitting on. So, I’m excited for that. I’ll be looking at sync licensing opportunities, as well as, opportunities to engage with youth looking to contribute to the arts. In the next 3 to 5 years, I’d like to be touring with a nice little published catalogue of songs that I can proud to regularly perform.

TO. What inspired you to start GreenSeeds Music Society? Tell us more about the its projects?

Erzsi. I’ve always been really inspired by people such as David Suzuki and so after attending the IMPACT! Youth Conference for Sustainability Leadership conference in 2014 (where I got to listen to and meet Chris Hatfield), I wanted to do my part. I wanted to focus my energies into something bigger than myself. The First Nations are always thinking of their responsibility towards their great-grandchildren. So I left the conference with the feeling that I must do my part towards guiding others to appreciate the importance of having clean air, clean water, clean soil and healthy food.

A couple of months after the conference, I applied for IMPACT! funding to record environmentally-themed music for children, and got the funding. Out of that, the GreenSeeds Music Society was born. It’s a collaborative project among musicians, teachers, artists and environmentalists. We recently became a SOCAN publisher and published our first song called “Big Tuna Troubles.” The hope is to acquire sync licensing to fund more recordings by various artists and build a catalogue that we can create bilingual, multi-media educational materials to take to schools and community centres. We will be piloting our first set of 8 sessions at this year’s Upgyres’ 2nd annual Clean Up The Ocean Concert June 25th at Stanley Park. Anyone who is interested in getting involved with GreenSeeds Music Society can visit and fill out the member section of our site.