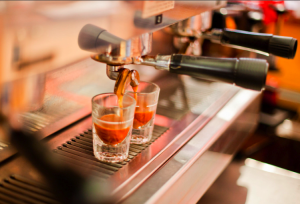 Our café customers and blog readers are already familiar with the story of coffee and how it spread long ago from wild bushes in Ethiopia to modern-day cafes around the world. But what about those specialty drinks that we love so much: espresso, lattes, cappuccinos, macchiatos and more? Where did they come from? How can we tell the difference between them? Here’s a quick guide.

Espresso. The essence of coffee

While coffee has been around since the Middle Ages, espresso is a relatively recent invention. In 1884, businessman Angelo Moriondo patented the espresso coffee machine with the idea of producing “instant coffee” for the drink’s rapidly-increasing customer base.

The new invention was called “New steam machinery for the economic and instantaneous confection of coffee beverage”. The machine (and its modern variants) produced a strong, black “essence” of coffee that packs a big caffeine punch.

It was introduced to North Americans indirectly, through American WW1 soldiers stationed in Italy; they found Italian espresso so strong that they typically diluted it with water, resulting in what came to be known as the Americano. It would be many years before espresso would become popular on this side of the Atlantic, when innovators began to experiment with espresso and traditional coffee beverages… for which we are very thankful today.

“Marked coffee”, a macchiato is essentially coffee with a “stain” of milk in it – about a teaspoon’s worth. The drop of milk is intended to mute the potent and (for some people) overpowering taste of an espresso and give it just a little hint of a creamy flavor. Whoever invented the latte probably invented the macchiato about two seconds previously – which brings us to… 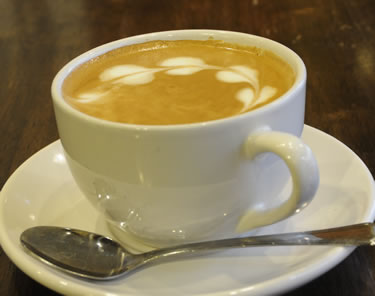 Continental Europeans were enjoying the latte, a creamy coffee drink made with espresso and steamed milk, long before British and North American coffee drinkers picked up the habit. Unlike the coffee bean itself, the latte’s origins likely stem from cafes in Austria or Italy in the 1600s or 1700s. There is no noted inventor of the latte – presumably, it could have come about independently in many cafes once the espresso machine came on the scene.

Coming rather late to the party, a cafe in Berkeley, California allegedly claimed they invented the caffè latte in the 1950s – in any case, the latte didn’t truly become popular in the USA and Canada until coffee culture flourished more generally in the 1990s.

The cappuccino’s basic ingredients once again are coffee and milk – so how does that make it different from a latte? It’s all about the preparation. First, pour in the espresso, followed by an equal amount of hot milk. Now steamed milk foam adds a layer of frothy, velvety texture. The drink is topped with chocolate shavings, raw sugar, cinnamon, nutmeg or other spices and served with a teaspoon. It’s no longer just a coffee beverage – it’s a work of art.

How did the cappuccino first come about? Around the 1700s, Austro-Hungarian coffee houses began serving up the “Kapuziner” or coffee with cream and sugar. European cafes experimented with various spices and whipped cream. By the 1930s, Italians had begun drinking ‘cappuccinos’ – and by the mid-20th century, as espresso machines began turning up in greater numbers in North America, everyone was able to enjoy a sweet, uniquely textured “dessert” coffee.